After a morning of heavy rain, the afternoon brought drier weather and once again Kingston RC hosted an excellent day’s racing. Rising early at 4.14am, Jamie and Miles towed a trailer of 16 boats, numerous blades, and trestles up to Kingston for which we were all truly grateful!

In the mixed category of Masters age groups, Bewl had three doubles with various timed head starts. In the Mas C/D 2x Crawford & James were beaten by Maidenhead and in an ‘all Bewl race’ Mas E/F Neil & Andrew beat Rob & Alastair. In another mixed Masters age group category Suzanne MasE 1x enjoyed her race despite the bouncy water.

Many thanks to Jamie and Miles and to all who made it such a fabulous day! 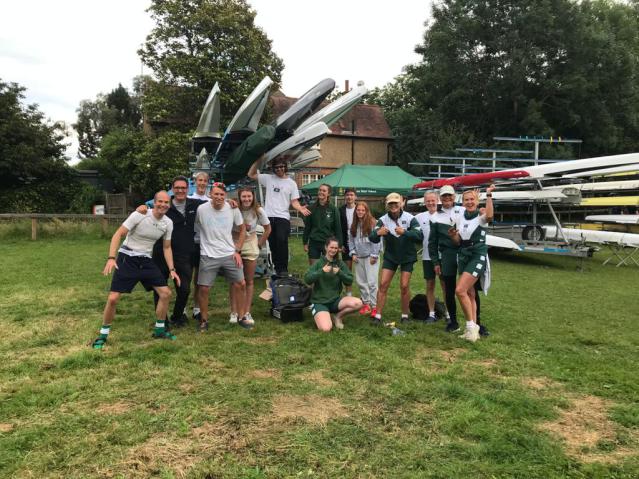 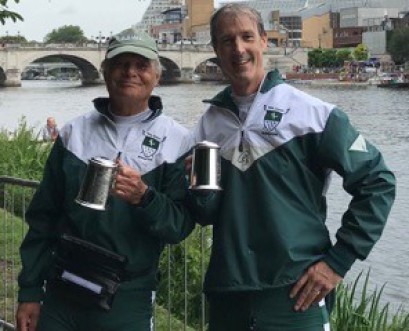 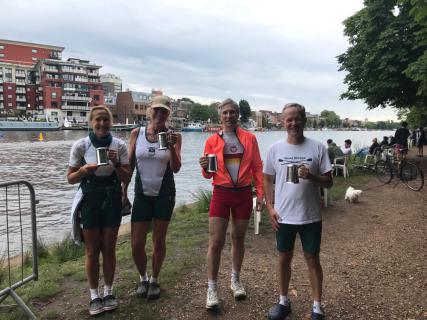 A small squad of BBRC Juniors entered this stripped back Covid safe regatta and our first Regatta after the Covid lockdowns.

On a very hot day,  the J18 4x of Ollie, Theo, Max and Matt came off an excellent start with some assured steering from Matt to hold second in their final (3.14.4) to York City (3.07.0) and beat crews from Star Club and King Rochester.

In the WJ18 4x (Susi, Ottilie, Milly, Phoebe) BBRC were in contention with the leaders up to 700m ultimately coming third in their final behind York City and Hartpury in 3.46.3 and a first regatta race for Milly.

It was great to see BBRC Juniors back racing in a regatta after the prolonged Covid absence of events and gives a good marker for building on for further Summer racing.

At the first residential World Class Start Camp in over a year, Bewl sent three athletes (sadly Seb was left at home with his THIRTY HOUR architecture exam..). This was a great opportunity for them to show what they have been working on for the last year. Sophie Pepper was promoted from group E up into group D by proving that the work she has done to strengthen her core and trunk has paid off. Keyan O’Donnell was promoted from group C into group B by making a big step up in his 1x speed, which suggests he is at a high level for an international junior. Biba Rabjohns also made significant improvements in her 1x speed and core/trunk endurance but narrowly missed out on group promotion 1x speed by 0.7% and the press up test.

The camp was immediately followed by a busy half term week of racing. On Monday, Biba and Sophie were the first Bewl Bridge RC crews to race since 2019 and competed at the Junior Sculling Regatta as a WJ16 2X. They came away with a bronze medal, lots of improvements and a reminder of how great rowing racing is.

On the Tuesday to Thursday, Keyan was at Dorney Lake competing at the GB trial with the fastest U18s in the country. He made great progress through the days to climb well into the top groups of scullers likely to form the GB team for the World Championships. Massive thanks goes to Miles for dropping everything to support Keyan extremely effectively when Richard was unexpectedly out of action for a couple of days. Sadly, British Rowing has announced it will not be sending a team to the Junior World Championships, but the trials process was very helpful nonetheless.

On Saturday Sophie and Biba were busy up in Peterborough winning the WJ12 2X event and also racing their singles. In the meantime, Keyan was back at Dorney Lake at the Metropolitan Regatta putting into practise all the improvements from the last week and coming away with a win (and a very chunky medal).

Well, we finally got back on the water after what seemed like one of the longest winters I can remember.  I suppose the only consolation of the lockdown was that we didn’t have to endure cold, windy and wet January, February and March on Bewl when it can be at its worst! It’s great to be out in a boat once more and, particularly for those of us who are sick and tired of the ergo, to have something different to look forward to every week! However, despite the lack of rowing in the first quarter of the year, there has been a lot going on since the last newsletter in December, and much of which has involved an army of volunteers from all parts of the Club who I must thank for their time and hard work, though I won’t name you all as there are too many to include (and I’ll only end up leaving someone out!).

So, what got done?

- We managed to fit in two ergattas over the enforced break, with many other clubs joining in, which again puts a feather in BBRC’s cap.  We even included an adaptive category which was much appreciated by those who entered.

- Before returning to rowing at the end of March, a huge effort was made to get everything ready - checking boats, blades, racks, safety stuff, launches, replacing the hose reel, checking the pontoon, removing bird’s nests in shoes (!) etc. etc.

- We persuaded MSL to replace the boathouse roof and invested some club funds to upgrade their proposal of a plain tin roof to an insulated one to help combat the condensation that has been damaging some of our equipment such as blade grips and shoes.

- The disgusting mouldy blade grips on the newish Concept2 sweep oars have been replaced with new blue and green grips.

- The need to empty the boathouse for the installation of the new roof gave us a great opportunity to clear out the boathouse (and the blade shed) of all the accumulated rubbish and obsolete equipment that has been lying around for years.

- We have painted the boathouse and repaired the windows (which now have more filler than wood in places!).  A fantastic job - see the photos later in this newsletter!

- The racks have all been labelled so you know where to put your boat!

Sadly, we have of course missed a lot of what we would have normally been doing as a club.  There was no ceilidh; no Bewl Head or other head races; no visiting Clubs, although we have just managed to host Lea RC juniors which Jamie reports on in this newsletter; no JIRR (again!) or Scullery for the Juniors.  I really hope we can get back to a more normal operation, but in the meantime, I thank you all for helping to make what we ARE allowed to do possible by sticking to our COVID protocols, which we will relax when we are able to.

But we are definitely emerging from the tunnel! Competitions are being organized and entered, LTRs are starting again, other clubs are arranging visits (University of London are planning to visit for training camps in June and July), and even Henley Royal Regatta is going to take place albeit in August instead of July. I really do think we can look forward to a decent summer of fun at Bewl, and I look forward to seeing you all down there enjoying yourselves.

There are two great reports in this newsletter about former BBRC members, Emily Craig and Georgie Grant, who have separately gone on to accomplish great things in the rowing world.

Finally, for those of you who are British Rowing members, I hope you spotted in the May BR newsletter Lou Allen’s photo of someone limbering up on the pontoon on a glorious looking morning at Bewl!

A Big Thank you to everyone who helped in getting the Boat Shed prepared for the new roof, with moving boats/blades etc in and out. And A Big Thank you to those who helped with the external scrubbing and painting: 1 Captain Angus and 3 previous Captains: Martin, Chris and Rob M taking the pic.

23 members of the Bewl Junior squad welcomed Lea RC for the second time to Bewl for a morning training outing and 1000m match racing. The weather had kept everyone on tenterhooks all week with a looming gale and we were close to a last minute cancellation. But our optimism paid off with decent water on the rowing arm and both squads safely back on dry land by 11.00am after a bumpy ride home as the predicted south westerly arrived.

The pressure of GCSE’s and a few sore throats saw some of the Lea contingent depleted but Emily, Saskia and Matt subbed in to the opposition crews with typical versatility.  A big thank you also to Wendy for coxing our J14 mixed quad in tricky conditions, Miles and Brooke for coaching their groups and David for marshalling everyone on time from the pontoons. By all accounts some close racing and competitive drills were enjoyed by all.

Along with the invaluable experience, it was great to bring a sense of competition in to our training. The Lea RC coaches Harry, Lindsay and Richard were hugely appreciative of the Club’s hospitality. Thanks also to Sarah Wyn-Jones for organizing the Lea RC team and we look forward to catching up with her at Docklands soon.

JUNIOR LEARN TO ROW RE STARTS AFTER COVID