Work began to construct the reservoir in 1973 by damming and then flooding a valley. It was completed in 1975 having been filled with over 31,300 million litres of water. The project cost £11 million to build. It is now the largest body of inland water in south east England. 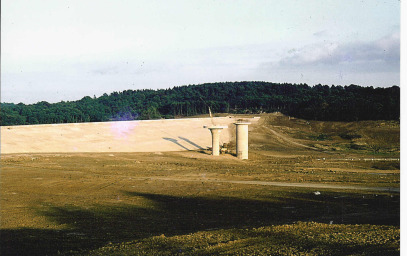 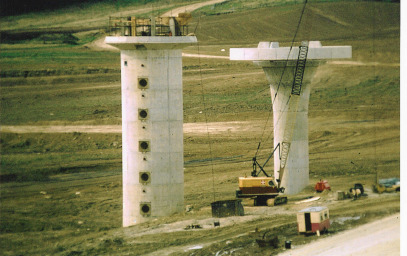 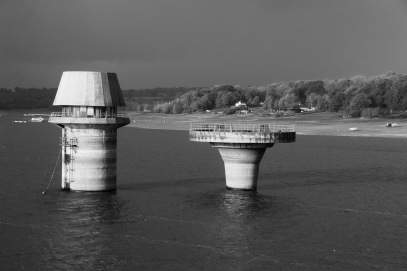 BBRC's first outing and write up in the local paper, and founding letter. 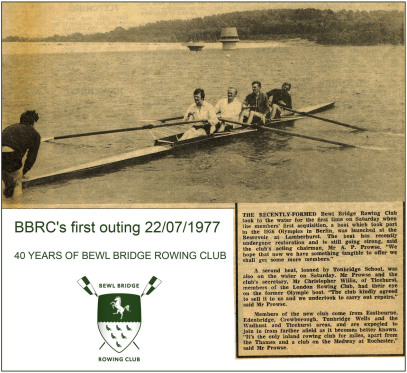 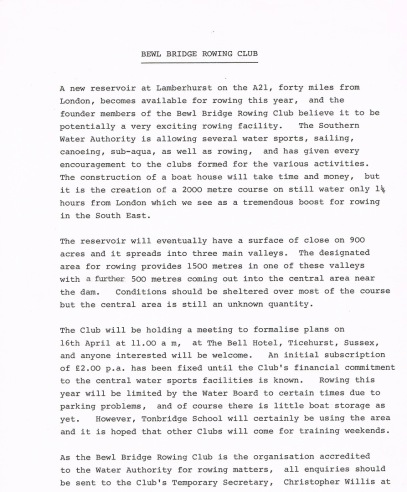 It was the Morning of April 16th 1977; I arrived at the car park of The Bell Inn in Ticehurst following a recent ‘phone call from Chris Willis, inviting me to an inaugural meeting of the recently formed Bewl Bridge Rowing Club. In the car park was what turned out to be Chris’ Renault 16 with a blue upturned single sculling boat on the roof. A signal that rowing really was about to start on the recently flooded new reservoir named Bewl Water. A career move had brought me to Mayfield in 1975 and following an absence from rowing since 1971 when work took me a way from Marlow Rowing Club, at last there was an exciting prospect of taking to the water again.

Prior to this meeting Chris, along with Tony Prowse, had worked hard to form the Club with ARA recognition and negotiations with Southern Water the owners and operators of the new reservoir and its surrounds. Increasing need for reservoir water storage was foreseen after the 2nd World War and the Medway Water Act of Parliament received Royal Ascent on 26th July 1968, which facilitated the building of the reservoir. Work started in 1973 and the main works were completed at the end of 1975. Under the terms of the Act water sports were to be encouraged. Bewl Valley Sailing Club had been formed and a canoe club and what became a short-lived diving club were also formed. Fishing was encouraged partly with a Fly-Fishing Club but on a far more substantial basis Southern Water would organise fishing on a season ticket and day ticket basis. The reservoir would be maintained by a team of rangers who also ensured the safety of all visitors and users of the facilities on and off the water and they also ran a trout breeding programme.

Unfortunately, in a way, Tony Prowse was offered a new job in Devon just as the green light was given for water sports to commence so he was denied the opportunity to enjoy the fruits of his and Chris’ labours. At the meeting at The Bell a small Committee was formed including a chap from Lewes agreeing to organise what was then weekend rowing. As has been highlighted by a cutting I kept from the Tunbridge Wells Courier the first actual outing was on 22nd July. At this stage I must admit that although I joined as a founder member, I did little rowing in 1977 while I finished renovating a cottage in Mayfield and with the presence of two very young daughters. At the next AGM our chap from Lewes admitted that Bewl Water was too distant for him, so I found myself volunteering to co-ordinate rowing outings for our then small membership with one IV and a tub pair.

I am sure at that inaugural meeting Chris Willis and I did not foresee BBRC expanding to the size of the membership it is now with so many boats and other assets.

Next instalment will be about the Club’s Boat Houses.

It could be said what is more boring than reading about a shed, but when it is filled with racing VIIIs it is a Boat House! With the current refurbishment and new roof of our Boat House it is a moment to reflect on how things were in 1977. At the start of the Club activity, we had one boat, a Coxless IV known as the Berlin IV for a reason which merits another story. It was stored on trestles in one of the Reservoir Constructor’ sheds near the Dam. The shed was located close to the current Administration Office Complex and was only a temporary building destined to be removed now that the Dam was completed, and the Reservoir was filling up. Apart from treading carefully around the builders’ debris we then had to carry the boat down the path leading to the water by the Dam. In fact, we used to launch near where the Aqua Park is located. I think it was a longer and certainly steeper route than our current path to the launching pontoon.

Southern Water Authority (SWA) which was our direct landlord in those days was constructing the Maintenance Complex close to the Fishing Lodge. In addition to the Rangers’ workshops another shed was included for the embryonic rowing club which was increasing in activity as a “restricted” IV and a Tub Pair were joining the Berlin IV and various members’ own scullers and of course blades needed to be stored in a building as in those days almost all boats and oars were made of wood, so undercover storage was important.

We duly moved into the new Boat Shed which confirmed in the eyes of SWA and passing Bewl visitors that the Rowing Club really was established and intending to stay! As the 1980s arrived we aspired to buy another boat and then bought a second hand VIII. However, the arrival of our first VIII, which was wooden and quite old presented a problem in that it was too long to fit in the Boat Shed. We devised a plan to cut a hole in the end wall and attach a protruding mini extension sufficient to accommodate the bow canvass section, but this required SWA permission. I attended our Annual Review meeting with SWA staff in 1985 with our Treasure John Tipping and described our proposed modification. To our surprise the response was that SWA could do better than that and revealed they had decided to build another shed alongside our existing shed which would be long enough to accommodate VIIIs with space to spare at the end. They told us they wanted to use our existing shed to provide undercover space for the Canoe Club and partition off a section to expand SWA’s workshop. They also intended to cover over the gap between the two sheds which would provide more canoe storage. Soon after we moved into our new shed now worthy to be called our Boat House which was soon filled with more VIIIs, IVs and scullers. Oars were accommodated on a moveable rack which is still in use.

It is very pleasing for early members to see how membership has increased over the years and with much success, and with it the need for the boat fleet and equipment we now have. Fortunately, the arrival of carbon fibre and other plastic materials for boat and oar/blade construction has enabled us to store many of the boats outside. Our Boat House continues to be an essential base for storing boats and our activities, and we must continue to look after it as we are now doing with the new roof and painting and other maintenance past and ongoing.

If you are starting a new Rowing Club, to state the obvious you need a boat! So, Chris Willis, and Tony Prowse, who were members of London Rowing Club (LRC) showed interest in a coxless IV languishing in the corner of the LRC boat house and thought with some tender loving care that might just do to row on Bewl Water. With some fierce negotiations they secured a deal to buy it for £50!

After some refurbishment it was rendered fit to float and so it’s first outing at Bewl was on 16th July 1977 alongside another IV loaned by Tonbridge School. The Berlin IV served us well for a few years although I lost count of the times, I carried out repairs with fibreglass resin to the inside of the stern section which was prone to splitting. Finally on a sunny Saturday afternoon in July 1985 it split again and took on so much water we were sinking! We managed to row it back to shallow water close to the dam by which time the water was level with the top of the sax boards. We stepped out and rolled it over in the water so we could lift it out upside down. That was its last outing as we concluded further repairs were not viable and it was returned to the boat shed.

You may be wondering why it was called the Berlin IV? In 1936 The 3rd Reich, of course led by Hitler was triumphantly hosting the Olympic Games in Berlin. Within the British Rowing Squad were four rowing in the Coxless IVs events. For the actual races at the Olympic Games Sims & Sons, boat builders in Putney, were commissioned to build a fine boat for which light weight was more important than robustness for long life, but sufficiently capable of withstanding the Olympic races. The crew won a Silver Medal coming second to the German crew. The boat returned to LRC after the Olympics and was used as just another boat in its fleet. Despite its lightweight construction it existed long enough for Chris and Tony to think it was worth acquiring for BBRC. In fact, it was fit for active use for another 8 years and 49 in total.

In 1986 Kenneth Payne, our President at the time, who had rowed in the GB VIII in the 1932 Olympic Games at Los Angeles, had been having a conversation with Peter Coni, another well-known rowing figure at the time and President of LRC.  Kenneth asked if we would like to sell the Berlin IV. Being of no practical use to us by then this was an appealing proposition especially as the figure being offered was £200! LRC had by then realised the boat was a significant part of its heritage and after its return it was hung from the ceiling in the Long Room of LRC complete with a plaque denoting its Olympic history and that it was in active use at LRC and BBRC until 1986.

Having been a member of LRC myself during the 1980s when I could row there on Wednesday evenings, I remember it being displayed, so I am delighted to find it still has pride of place in the Long Room at London Rowing Club ever since, as the photographs show.

A former Captain & Secretary of BBRC

BBRC Held it's First Regatta in July 1979, two years after rowing was established at Bewl.

The regatta was held up the 'rowing arm' finishing at Rosemary Dam, The programme doesn't say how long the races were? Probably, roughly 1000 metres, looking at the map? There were 18 races in total, and 12 clubs involved. Three Bewl scullers, I wonder who they were?

Most of these clubs are still around, and perhaps one day we'll be able to invite them back for another wee race.

The club had high aspirations 'a major step in the creation of an International Rowing Centre'. Still a way to go here...

Although BBRC isn't an International Rowing Centre, We've certainly transformed in membership and number of club boats. So from humble beginnings with big aspirations we now offer substantial Junior, Senior and Masters rowing. A big thanks to our founding members.

BBRC slowly developed over the next decade, unfortunately there aren't many photo's from the first decade. The photo below, probably from the late 1980's. The crew Stroke: Peter Reeves, 3:Rod MacInerney, 2: Dave Butterfill, Bow: Ian Bailey.

Work in progress to find more photo's and memories. 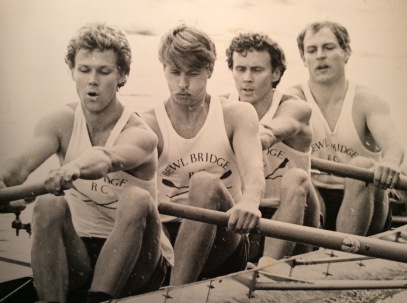 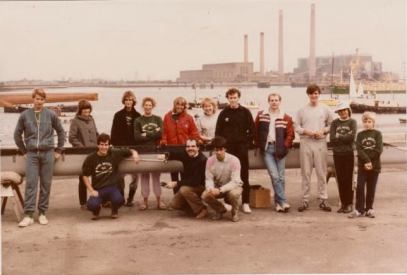 Bewl Summer BBQ at the Froggatts in Wadhurst 1999 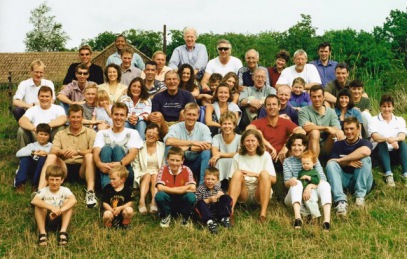 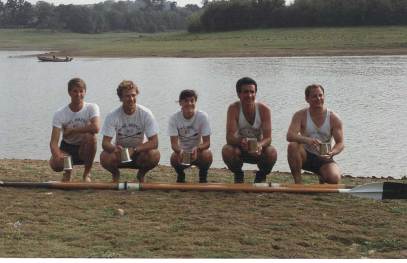 The crew drove down from Bewl in a blue defender towing the trailer.

Crew: from the left. 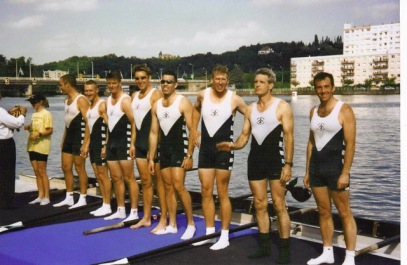 Margaret who has been coxing for many decades at BBRC ,here with a winning Master's crew, holding their pots. 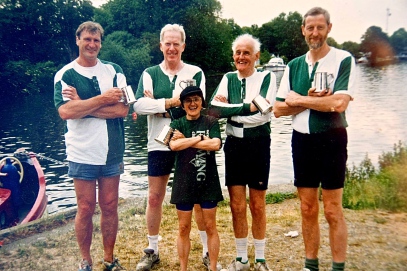 live tracking shows mark is on his way, link to his webpage below: 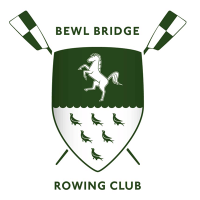 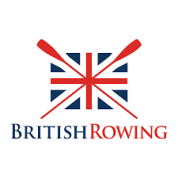 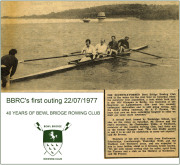