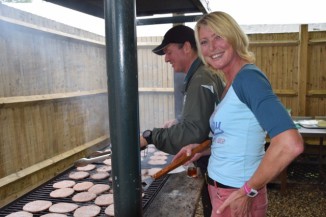 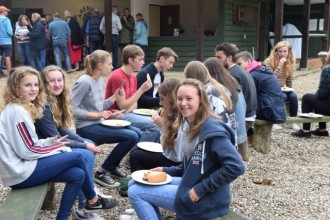 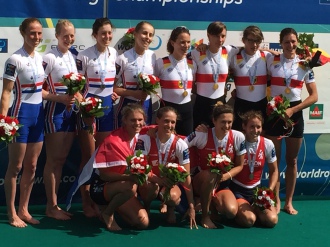 Emily started at Bewl aged 12 and has been aiming for a place in the senior squad ever since and now 10 years later she has reached her goal and won a silver medal too.

Juniors it can be done! 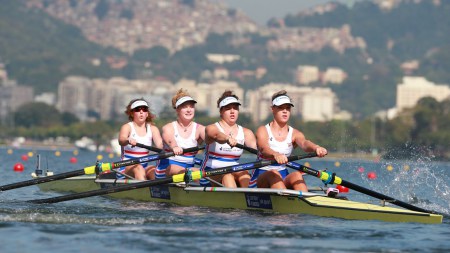 The WJ4 came 6th in the A final. A fantastic achievement and experience. For details of times click here. 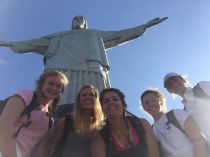 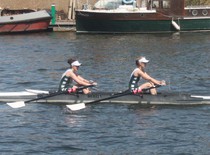 Kingston Regatta - 11/12 July 2015
Bewl Bridge Rowing Club had a squad of 28 Juniors rowing at Kingston Regatta racing over the 1000m course for J16 and over 500m for J15 and under. Entered in mix of quads, doubles and singles the squad picked up two wins. In IM3 2x Robbie Britton and Ollie Mumford continued their good regatta form with a hard fought win over Kingston in the final having come through very competitive heats and semis. Catherine Northridge and Lucy Horner entered in Novice Doubles won a close race with Ardingly in the final. In J15 doubles after excellent wins in both heats and semi-finals, Will Chudley and Ben Mumford were unlucky to lose in another close final by half a length. Well done to all who participated.

The Masters section at Bewl Bridge Rowing Club enjoyed continued success on Friday and Saturday at the internationally renowned Henley Masters Regatta, staged over 1000m on the same course as Henley Royal Regatta the week before, between Temple Island and Upper Thames Rowing Club.  Our quad scull of Hagen Jahnich (stroke), Rod McLean, Mark Northwood and Angus Bogle (steers) followed on from their success at the National Masters Regatta at Nottingham in June, where they won the gold medal in the Masters D category (50-55 age group), with victory in the same category at Henley.  They beat Wallingford RC (5 lengths) and Walbrook RC (1 length) in their heats before coming up against a much fancied US crew, and previous Henley Masters winners, from Cambridge Boat Club based at the home of US rowing on the River Charles in Boston, Massachusetts.  The US crew, recent US National Masters Champions, contained in their boat Tom Darling, a former US Olympic silver medallist and the current World Indoor Rowing record holder in the age group, as well as two former US national lightweights.  Bewl took the initiative with a slight lead of 1/3 of a length in the first minute, after tight start, and stretched this to a convincing win of 2 lengths by the finish line.  You can find a clip of the race on YouTube here: https://www.youtube.com/watch?v=F9GeTlcMRIM

Jonathan and Sarah Morris also competed in E1x and WD1x respectively.  Jonathan went out in the quarter final to a sculler from Dart Totnes by 1 1/3 lengths, whilst Sarah battled against the eventual winner from Cambridge Boat Club in Boston, losing by 3 lengths in the semi-final.

Womens Henley
Georgie and Grace reached the J2x final. The winning time was 05.52 - a time which they had previously beaten - close margins! Congratulations to both on a fantastic achievement. 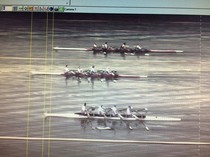 Masters Championships - 13th June 2015
There was success for Bewl Bridge at the Masters Championships. As you can see from the photo, it was a close race in the C4x final where Hagen, Rod, Dave and Angus won gold. That was 30 mins after Mark and Dave had won silver in D2x. And earlier in the day, Hagen Rod, Mark and Angus won the D4x final in another cracking close race. So 2 Golds and a Silver. Very well done all. 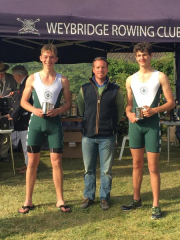 In some challenging, very windy and uniquely river style water with some bounce from launches and leisure craft the Juniors had a very creditable day’s racing with some great performances and some first regatta experiences for others.

With limited recovery time Robbie Britton then competed in the J18 1x and after two great sculling races to get to the final had a tight race against a much fresher opponent and just ran out of steam to mount a final challenge – a tremendous effort. Heat bt Hillingdon RC  3.21 Easily; Semi – 3.46 1-1/2L  over Bournemouth College. Lost in the Final to Reading RC 3.07 3-1/2L.

In the J15 4x+ (Will Chudley / Elliot House / Patrick Monaghan / Ben Mumford Cox Alex Britton) had a great start to the regatta season with a heat win in 3.06 3L over Whitgift School (with some excellent steering from cox Alex) before losing to Walton RC in the semi in 3.02 by 2-1/4L. Walton went on to win the Final against Windsor Boys School. Given the limited opportunities that this crew has had on the water, the prospects for this crew are looking good!

The girls squad (Freya Miller, Bella Hobson, Hannah Morten, Georgina Burns) competed in a quad and double. In the quad after a delayed start with launch washes and the difficult wind, the crew were up against Eton Excelsior in the J16 4x final and were going well before a bank clash and so the race was not rowed out. In the double, with a spirited performance against Staines the verdict was 4L in 3.32. Staines were the eventual winners in the same time with an Easily verdict over Weybridge. Some great learning experiences for a competitive and determined girls squad.

Well done to the whole junior squad and thanks to all for their support on the tow path. 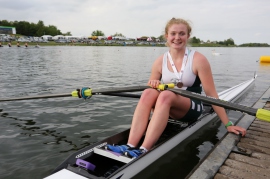 Six Bewlers headed to Nottingham for the National Schools' Regatta on 22nd-24th May. Georgie Grant won bronze in the women's U17 single, Bewl's first ever medal at the event. Everyone was able to learn something new from the weekend; well done to all competitors and to Miles. 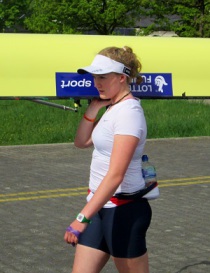 The four's first race was a tough one, with five incredibly strong German crews; the girls went out hard but the Germans proved too strong. The girls came fifth putting them in the B final. However the time that the girls achieved would have put them second in the other heat, which demonstrates the speed of their race. They made a change in the B final, and led from the first stroke, winning confidently. The following day the girls had only one heat in the four and switched into pairs for a later race. In the four the girls came sixth overall and in Georgie and Zoe's scratch pair they came third.

Overall it was an amazing opportunity for Georgie and she got her first GB all-in-one! 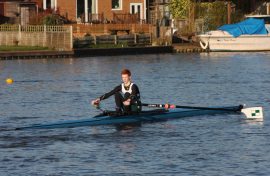 We took a large contigent of juniors and adults to this event. It was a lot of fun and everyone did well. Click here for results

Pairs Head - 4th October
On Saturday 4th October Bewl entered five doubles in the Pairs Head, which saw over 500 crews race over a course of about 4,500m from Chiswick to Harrods wall. The heavens opened just before the crews boated, so everyone got very cold and wet while marshalling took place, but the organisers did well to get crews away pretty much on time, and the conditions were reasonable once the race got underway. Crews noticed the Bewl vocal support received from various points down the course which was good. Fastest Bewl crew home was the MD 2x of Northwood/Bogle in 15.05 coming 5th in their division. Next was the Mixed MD 2x of Morris/Morris in 15.25 coming 2nd in their division. Then came Maunsell/Sannachan in 15.36 in ME2x and 5th in their division. Bliss/Suthers came home in 16.47 in Mixed ME 2x and Grant/Jones 17.16 in Mixed MF 2x. Some encouraging performances, and thanks to Angus for trailering and the tea bar afterwards! 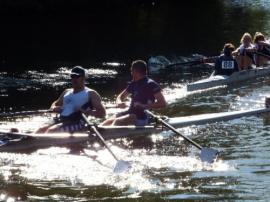 Jon Williamson (Kings Canterbury) and Rod McLean did a scratch Mas C double and were the fastest double (masters or otherwise) on the day. Even managed to be the second fastest boat on the day only beaten by a Mas C 4X+. Jon steered superbly round the bends and past crews, so a good day for a Bewl composite. 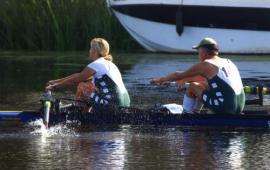 Four Bewl crews entered this year’s Great Ouse Marathon on Sunday 7th September – a fifteen mile race from Downham Market to Ely. The weather was ideal – dry, sunny and only a light breeze. There was some concern when the eight had not arrived half an hour before their race time, but that apparently was another story involving finding a last-minute sub to replace a sick crew member. The eight eventually arrived to find their boat rigged by fellow Bewlers and ready to go………….

This is one of those races where completing the course in one piece is the main achievement, as well as the bonus of it being on a beautiful stretch of water.

All four crews did well. Fastest was the “Morris” mixed “D” double in 1 hour 33 mins and 58 secs, winning the category and setting a new record. Close behind was the “Gill” IM3 eight who also set a new record for their category of 1-34-12. The “Sannachan” “E” double was unlucky to be pipped by one other double in their category, but finished in a good time of 1-35-05 which was faster than previous records in two younger age categories (“B” and “C” doubles) and well ahead of the next competition in their category. Finally, the “Suthers” mixed “E” pair came home in a very respectable 2-04-48 which now becomes a record for that category. 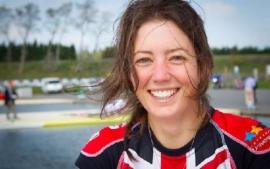 Thrilled to report that BBRC rower Emily Craig has again stepped onto an international podium to accept another bit of tin on a piece of ribbon. A gold-coloured one!!

Emily romped home in the Women's Lightweight Singles at the World University Championships. More details in the UofL link below and photos below. Huge congratulations Emily!!
http://ulbc.co.uk/news/